Here is what you previously selected during your last visit, so you can easily pick up where you left off.

We pick up, store, and bring back your stuff–– all for less than self storage.

The most densely populated city in California, San Francisco has a culture that is hard to find anywhere else in the world. With residents from all over the United States as well as the world calling San Francisco home, this amazing city plays host to countless international shopping retailers, parades, and interesting architecture. With 837,000+ residents calling it home, this “City by the Bay” has quite the history and reputation.

With habitation dating back to 3,000 BCE, what is now San Francisco began as a few separate fishing villages, gradually growing into the massive city we recognize today. Playing a popular role throughout the California gold rush and also known for earthquakes and fires, living in San Francisco is a rewarding and at times challenging experience. In addition, San Francisco is known for being a center for the hippie countercultural movement, gay rights, and the peace movement.

No trip to San Francisco is complete with seeing two of the most iconic images in the U.S. The Golden Gate Bridge stands as one of the longest suspension bridges in existence. An iconic symbol colored in red, the Golden Gate Bridge is near another amazing attraction, Alcatraz. Home to convicts and starring a lead role in both older and newer movies, the abandoned prison island of Alcatraz continues to inspire curiosity and wonder from all who tour it.

San Francisco is also well known for having excellent weather during the summer. With cool summers, people living in the city quickly get used to fog, and occasionally rain. In addition, the steep rolling hills around the city allow for excellent hikes and amazing views.

Also known as the “Paris of the West,” San Francisco plays host to cuisine and clothing outlets from around the world. Ranging from some of the best names in fashion to some of the smallest Japanese street fashions, San Francisco has something for every fashion taste.

One part of San Francisco’s success comes from the incredible number of businesses that call San Francisco its home. Along with five different major banks, San Francisco is also home to Yelp, Twitter, Uber, Pinterest, and Mozilla.

Residents of the area looking for affordable, convenient San Francisco storage are in luck. With MakeSpace, you never have to visit a storage unit. All you have to do is pack. We’ll pick up, store, photograph, and deliver your belongings for as little as $25/month.

Here's how it works:

We pick up your stuff.

We take it to our
storage facility.

We bring it back
whenever you want.

We’re Cheaper Than Self Storage

MakeSpace® storage experts will find the right space to fit your needs.

Not sure which plan to pick?

Our easy-to-use storage calculator will help you find the right plan.

Help Me Find a Plan

Speak to a storage expert and they can help find the right space to fit your needs.

You Should Expect More From a Storage Company

At-home appointments - our pro movers come to you

Free packing bins, save on boxes and tape 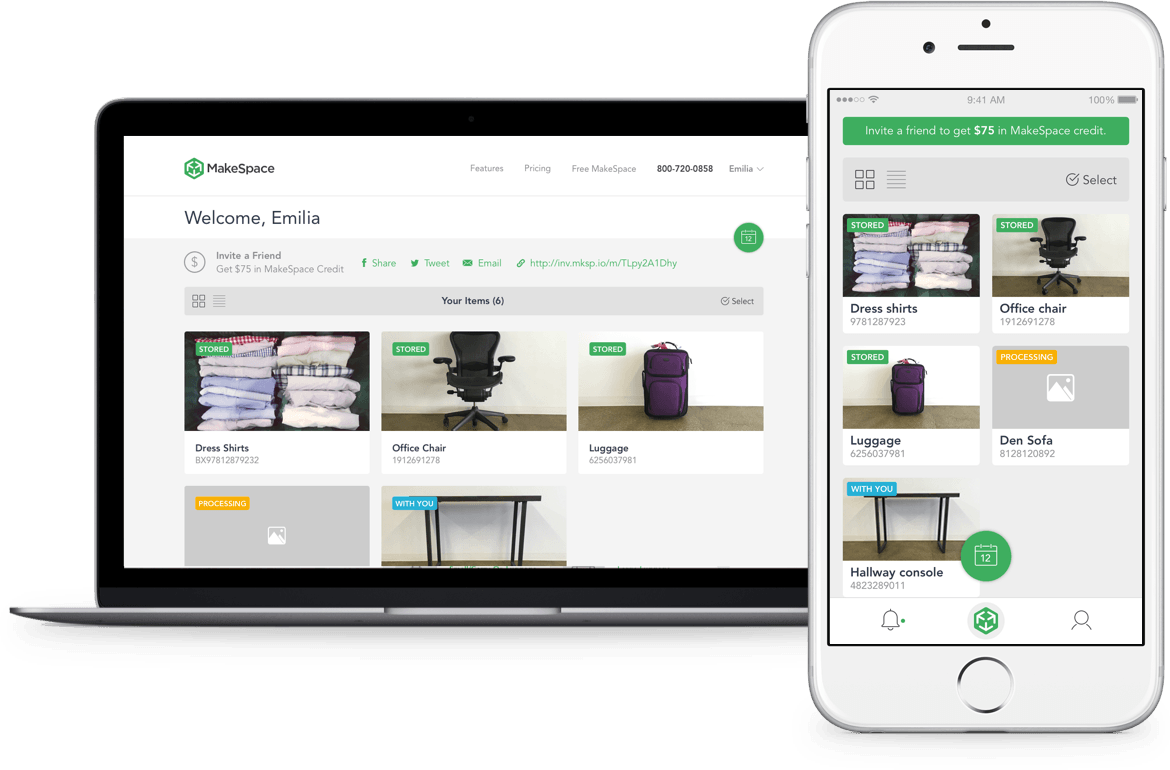 See what you put in storage.

Manage all of your stuff in storage, easily schedule appointments and keep track of them, tip your team, and more.